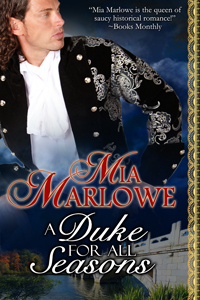 Sebastian Blake, His Grace the Duke of Winterhaven, has an inviolate rule when it comes to mistresses. He never keeps one longer than a turn of the season. But then he’s never met a woman as tempting as Arabella St. George…

A fiery operatic diva, Arabella is blackmailed into helping the French. When she gives the envelope intended for a French assassin to the Duke of Winterhaven by mistake, she’ll do anything to retrieve it. Even if she has to seduce it away from him…

“A woman, like a blooded hound or fine steed, has a finite period of usefulness. When that time has run its course, a prudent man divests himself of the asset without regret.”
~ A Gentleman’s Guide to Keeping a Mistress

Sebastian Blake hated to wait for anything. Fortunately, he was the Duke of Winterhaven. It was a simple matter to let others wait for him. That’s why His Grace settled into his private box at the theatre after the house lights dimmed and the gas footlights illuminated the Olympic’s red velvet curtain.

Sebastian preferred to miss most of the overture, if he could. His late arrival kept him from having to brush off those who would use a chance meeting at the opera as an excuse to curry favor.

Or worse, ask for one.

“Celeste isn’t joining us?” his friend Neville Granger whispered as the orchestra finished the overture with a flourish.

“Her season has passed,” Sebastian said with a shrug. “We parted ways and she left with a generous pension.”

Neville shook his head. “They don’t call you The Ice Duke for nothing.”

“Nonsense. Celeste knew exactly what to expect.” Sebastian was faithful and devoted to his mistresses, but he always dismissed them with the turn of each season and found a replacement. The rules were explained at the start. In this way he never grew bored, never had to end a relationship in anger or face tearful recriminations. It was simply a function of the calendar, eminently logical, utterly civilized. “She has a new diamond necklace and I have my freedom, as per our agreement.”

Neville brought his quizzing glass to one eye and swept the crowd below them. “Someday, my friend, you’re going to meet a woman who can’t be bought.”

“On that day, I’ll give you a bottle of that rare vintage of Spanish port you favor,” Sebastian said. “Provided you stop grumbling at me about it now. This is how I’ve ordered my life. Four times a year, I engage in a brief chase and then give myself three months to enjoy my prize. Don’t spoil this part of the process for me by scolding like a fishwife.”

“Make it a case of that port and we have a deal.”

“Done.” Sebastian leaned back in the tufted seat, sure he’d never be called upon to make good that wager. “Now, tell me about this soprano you think I’d like.”

Neville leaned forward so far, Sebastian feared he might tumble out of the box. Then his gaze flicked to the stage and he realized why Neville was willing to risk life and limb.

Sebastian didn’t consider himself the sort given to flights of fancy, but his imagination soared at the sight of her. She might be a changeling princess, offspring of the hollow hills. Or a pagan priestess demanding sacrifice. Or one of the three queens who bore King Arthur’s body to Avalon.

Then the ethereal Miss St. George opened her mouth and began to sing.

No wonder Neville calls her a diva. Her voice was liquid seduction, a fiery blend of passion and pathos. Sebastian decided then and there, whatever else she was, Arabella St. George was going to be his.

At least for the coming season.

“Thanks, William. Have you seen Irene?” Arabella called out from behind her dressing screen. The costume mistress was nowhere to be found just when she was most needed. Arabella had learned early in her career that there was no room for modesty in an opera troop, not with as many quick changes in the wings as she had to make during the course of a performance. “I’ve bungled the knot rather badly, I’m afraid. Step in here and unlace me, would you please?”

She turned her face to the wall and heard the clack of his heels on the hardwood. Capable fingers tugged at the knot and worked it free. Her corset loosened as the laces slipped through the eyes. The whale-bone prison fell to the scuffed wood floor. As a singer, Arabella always breathed deeply, expanding her ribs against the stays, but now she was finally free to move.

“Oh, that feels wonderful.” She arched her back, lifting her arms over head in a huge stretch. Her thin chemise was of fine linen, but it strafed her nipples with enough friction to make them rise to attention. “Thank you, Will.”

The rumbling baritone did not belong to William.

Arabella whirled around and looked up into a classically handsome face. His dark eyes glowed with a slow sensual fire and his lips turned into a practiced seductive smile. He might have stepped directly from a playbill for Don Giovanni, the tale of the consummate lover.

“No, I’m not. Forgive me for not introducing myself, but when a lady is in distress, my first inclination is to first come to her aid.” He removed his top hat, revealing a head of unruly dark waves Lord Byron might have envied. “I am Winterhaven.”

She recognized the name and knew he expected her to curtsey and fawn over him, but she realized immediately who he really was. He was wearing the specified top hat, bearing a dozen roses and wore a white carnation stuck in his lapel.

He was the contact she was told to expect.

All she wanted was to rid herself of the cursed envelope as quickly as possible. But in case anyone might happen by her dressing room door, she decided she ought to treat him as if he were simply another opera devotee come to offer the usual overweening praise.

Honestly, does he have to pretend to be a duke?

She straightened her spine, ignored the fact that she was practically naked and offered him her hand.

“Enchanted.” He bent and pressed a courtly kiss to her knuckles. His lips were warm and his breath feathered over the back of her hand. “Your performance was magnificent.”

“Thank you, sir. I’m gratified to have pleased you.” She accepted the bouquet and placed the fragrant offering in a waiting vase.

“Then perhaps you’d consider pleasing me more,” the man said smoothly. “Do me the honor of joining me for supper. I’ve arranged for us to partake of a midnight repast in a private dining room at The Peacock’s Tail.”

Arabella had overheard one of the opera dancers telling her friends about The Peacock’s Tail. It was an elegant establishment that boasted a French chef and sumptuous rooms designed as trysting spots for the upper crust’s affairs du coeur. Midnight supper at such a posh establishment was an enticing offer, but when she agreed to bear the secret envelope from her last singing engagement in Paris, she hadn’t signed on to become someone’s plaything.

“How kind, sir, but how premature. Alas, I’m elsewhere engaged this evening.”

“I should have expected as much. A beautiful woman never dines alone.” He took a step closer and lifted a hand to her cheek. “Allow me to tempt you to change your plans.”

His mouth descended to hers before she realized he intended to kiss her.

Arabella appreciated directness in a man, so she didn’t protest. She was no nun. She’d been kissed by adoring lovers, by tenors who’d really rather have kissed the baritone, and by a French count who knew a dozen delightful uses for his wicked tongue.

She considered herself well-versed in love play, but this kiss wasn’t merely an appetizer. It was a feast.

A feast that made her hungry for more. Her body softened against his hard one without her conscious volition. Every bit of her tingled with awareness, with anticipation, with heat. Her bed had been cold for more months than she cared to contemplate, but her body had no trouble remembering the pleasure it was designed for.

But however much her insides ached, this man was part of the blasted game she’d been unwillingly sucked into. She wouldn’t let herself be coerced into more. Arabella pulled away from him.

“With regret, I must decline.”

With buckets of regret, she thought ruefully.

The bulge in his trousers was formidable and if his kiss was any indication, the “duke” was a lover of considerable skill. Despite his chilly formal demeanor, he was all fire underneath and his nearness sent a flurry of conflicting sensations coursing over her. She steeled herself not to meet his gaze as she donned the wrapper that had been draped over her dressing screen.

“Allow me to offer you a libretto of this evening’s opera as a parting gift.” She had tucked the incriminating envelope within its pages earlier, figuring her contact might appreciate a method of concealing the volatile thing he carried. She held it out to him now.

He stared at the Don Giovanni libretto, his brows nearly meeting over his fine straight nose.

“You’ll find what you seek within its pages,” she said pointedly.

“No doubt, Giovanni has many things to teach a man, but unless I find you within this little booklet, I will continue in disappointment,” he said, taking the libretto and tucking it in his waistcoat pocket. “Thank you, Miss St. George. I will treasure this memento of our first meeting. However, you should know I am not accustomed to accepting defeat. You are a spectacular actress, but I recognize real passion when I encounter it. You were as moved by that kiss as I.”

She bit her lip. Could he scent her arousal over the roses?

He dipped in the shallowest of bows and put on his hat in a fluid motion. “My driver and equipage will remain at the stage door for one hour, should your plans change. I sincerely hope they do. Good evening.”

He strode away without a backward glance.

Arabella closed the door behind him, lest she be tempted to follow. The deed was done, the envelope delivered. Fernand and his cohorts would leave her in peace now. She’d never have to see any of them again. She escaped the ill-advised adventure with nothing worse than a few sleepless nights.

But why did her contact have to be such a delicious man?

She removed her stage makeup and re-applied a judicious amount of rouge for her exit from the theatre. It wouldn’t do for a diva, even an exhausted one, to look like a washerwoman. Then she donned a simple gown, grateful that unlike her heavy stage costumes, she could dress herself in street wear. She was tying the bow of her bonnet, when someone rapped on her door.

A man stepped into her dressing room, wearing a top hat and bearing roses. A white carnation winked at his lapel.

“Bonsoir, Arabella. I believe you have something for me.”

Her heart shuddered at the sound of his voice. Fernand de Lisle closed the door behind him.

“Historical romance has never been so much fun!”
~ Barbara Vey/Beyond Her Book, a PW Blogger